Our Location ► Our History ► Office Rental Space ► Contact Us ► 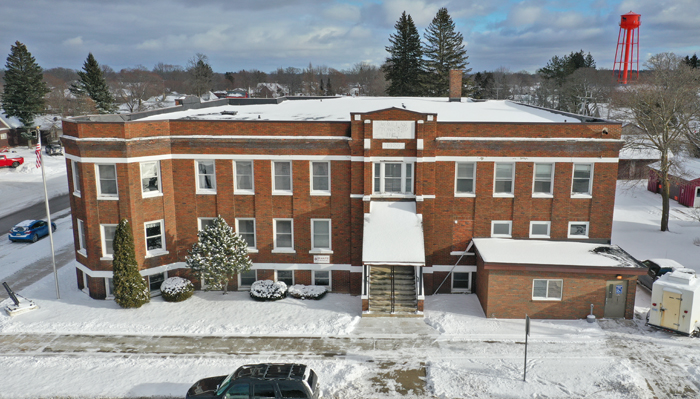 The McMillan Township Community Building has stood proudly on Newberry Avenue for decades, and has now hit its century mark. It is not just a brick and mortar building, but an icon and the heart of the community.

The building has been the center of all types of community functions, and has touched multiple generations of residents. With 100 years of service, the hall has a long and colorful past. Here’s how it got started.

In 1919, the citizens of Newberry wanted to erect a memorial to the veterans of WWI. It was decided to construct a township hall where events—specifically patriotic and veteran oriented—could be held. The proposed building would replace the old wooden village hall on the 200 block of East John Street.

But a barn was in the way. The barn belonged to local lumberman John H. Hunter, and in March of 1920, the Newberry Village Council gave Hunter permission to relocate his barn.

The contract to excavate the site was given to Richard Hall, who broke ground as soon as it thawed. Marshal N. Hunt from Sault Ste. Marie, Michigan was selected to construct the large brick building, which commenced in May.

Construction continued throughout the summer and fall, finishing in late December of 1920.

The following January a large formal ceremony marked the completion of the $100,000 structure, and the building was officially turned over to McMillan Township. The program, which The Newberry News proclaimed a “brilliant affair,” was held in the auditorium. It included speeches by local dignitaries, a patriotic sing-a-long and a dance with live music by the Baetz Orchestra.

Offices in the building began to fill up right away, and the Newberry Fire Department stored equipment there. Various community organizations took advantage of the spacious auditorium and meeting areas.

After nearly six years of faithful service to the community, tragedy struck on May 22, 1926. The Newberry Fire Department was called to the scene of the burning community building at 4 a.m. Before the firemen could begin fighting the fire, they had to locate their equipment, which was stored in the rear wing of the burning building.

Once they found their apparatuses through the thick smoke, the Newberry fireman, and the state hospital fire department worked on extinguishing the fire. The Newberry News reported a buildup of gases caused explosions, which spewed debris through the roof, and caused the assembled crowd to take cover. A falling flag pole hit one of the firemen on the head, leaving scalp wounds.

The two departments battled the flames for nearly two hours, and were able to stop the fire from spreading to other structures, including the Detzler residence next door.  The cause of the fire was never determined. The blaze completely destroyed the interior of the building, leaving the charred brick walls intact.

The township suffered a major loss with the destruction of their new building, and countless records.

Headquartered on the second floor, the American Legion Post #74 lost all records and furniture, with the exception of a radio, which was out for repair. Numerous records belonging to the Newberry Water and Light Board were also destroyed.

Within days, the McMillan Township Board held special meetings to plan reconstruction. According to the old minutes of the township board, the Newberry Village Council and the township voted to purchase a new mechanized fire truck—the first for the area—costing $4,700. The lot directly behind the building was purchased for construction of a detached fire hall.

Fire inspector William Weade, who was the chief inspector of the Newberry State Hospital determined the building could be rebuilt using the exterior walls. This is why the original construction date of 1920 is still visible on the north and west walls.

The Foster Construction Company was awarded the bid to rebuild and “fire-proof” the interior of the building. The company, located in Milwaukee, Wisconsin was no stranger to the people of Newberry. Foster Construction built many of Newberry’s brick buildings including the old elementary school in 1908, and the present Newberry High School in 1926.

The township board moved their temporary office into the second floor of A. H. Sherman’s drug Store on Newberry Avenue.

The reconstructed community building was re-dedicated February 23, 1927 with another formal ceremony. The building again became the center of all community functions.

In keeping with the original theme of a veteran’s memorial, a three inch Stokes trench mortar from WWI was installed in the north-front lawn in the 1930s. Prior to the installation of the war memorial in front of the school, the Luce County Veteran’s Roll of Honor was displayed in the front yard of the community building. Flag raising ceremonies and other patriotic programs were also held in the front yard.

Over the years, the building housed numerous state and local offices such as: the State Highway Department, the Luce-Mackinac Health Department, Community Action Agency and MSU Extension Services. The Newberry Lions Club, American Legion, V.F.W., Red Cross, W.B.A. and B& P.W. all called the community building home at one time or another. The building has been the location of the McMillan Township Offices, as well as the voting precinct.

The first floor auditorium had a long history of hosting a wide variety of events. The room with a capacity of 1,000, was headquarters for countless civic functions, plays, musicals, minstrel shows, concerts, wrestling matches, and meetings.  The seats were removable, allowing the space to be used for multiple purposes. In the earlier years, 40 percent of the fee from shows was kept by the clerk to help with the upkeep of the building.

Before the days of the high school gymnasium, both city and school basketball teams utilized the auditorium for their games and practices. Decades of high school dances, proms and community balls were also held in the auditorium. Currently, that space has a new lease on life as a gym for the Newberry Youth Basketball Association.

The basement was a space for wedding receptions, banquets, teas and dinners. The first floor “smoking room” was another area for community meetings.

In the 1960s, an extensive remolding and redecoration project took place at the community building. The late Marge Fuller, long-time Newberry resident, wrote an article about the remodeling for the Sault Evening News entitled “Newberry Community Building Stirs Memories.”  Fuller stated, “The electrical system was updated and new light fixtures were installed throughout the basement and first floor. … The entire building was treated to a coat of paint, its first since 1947.” The project also included complete redecoration from stem to stern.

Her story also reflected on the importance of the building to the area. “She has been the village square, the local meeting house and the patriot’s shrine,” declared Fuller. She noted hundreds of residents gathered in the Legion rooms on the third floor to hear the first radio broadcast to be received in Newberry. Fuller also said, “At least three generations of Newberry residents watched the flags unfurl at the buildings corners as they were prepared to lead the proud parades.”

In the modern era, its use has gradually decreased. “We don’t have near the activities as we use to,” stated McMillan Township clerk, Joe Villemure. “This building is our headquarters, and is still an important part of the township.”

Villemure’s current office is in the basement of the building, and many of his fond memories took place there decades ago. “I can remember our baseball banquets with Harry Heilmann as the guest speaker,” Villemure said. He also remembers attending dances and proms there during his high school days. “My wedding reception was also held in this building.”

The building looks much the same as it always did, and it is still a vital part of the town, even if it’s no longer a thriving social setting.

It is worth remembering, though, that the old building in the heart of downtown never was just a building. It was the heart of Newberry.

Map To Our Location

Copyright © 2023 McMillan Township. Logos, web content in part or in whole may not be used without written consent. All photos are Copyrighted and are not permitted for any other use. All rights reserved.